Today I would like to present you a very tasty recipe of chickpeas cakes enriched with Parmesan cheese, almonds and spices.

They are very easy to be prepared and only a few ingredients are needed.

With a rich salad and if you maybe a yogurt sauce they can make a great full but still light meal.

You may adapt the recipe to you taste for example with some herbs, with garlic or roasted onions or other spices. Enjoy!

You may also make bigger ones and make of them burgers.

Tortelli di zucca, cappellacci di zucca or ravili di zucca is a traditional dish which I always thought I should prepare once and that finally I made it for my family and for you!

This recipe of “pumpkin ravioli” (if I may translated in this way) has its roots around the city of Mantova, but you can find many different variation in the town of Ferrara (without amaretti), Piacenza (with the addition of ricotta), Cremona (with the sweet fruit mustard of Cremona, not to be confused with Dijon mustard), Pavia (where they use tomatoes with sausages for the sauce) and Reggio Emilia (less nutmeg and less mustard but more Parmesan cheese).

This specialty is are one of the most iconic dishes within the culinary repertoire of northern Italy. It should be best prepared with the “zucca mantovana” (a dry-fleshed yellow pumpkin) that has the best consistency for thefilling. The filling traditionally also takes crumbled amaretti biscuits and frequently “mostarda di Cremona” (a sweet, apple and fruits based sweet preserve) plus grated Parmesan cheese. The dough is regular fresh egg pasta (1 egg every 100 g flour), either shaped like a tortello (as I did) or like a square ravioli. I also saw different shapes, but is really up to you and how much time you would like spend for this fancy dish.

The addition of nutmeg to the filling and the herbs for the butter are essential and they give to this dish a rich and very enjoyable taste.

The version I made is without amaretti (I simply did not have them on hand), but I added a little bit of breadcrumbs the make the texture little stiffer.

Do want to keep the taste of the summer for the winter?

This is a simple but easy way to preserve the full flavour of your tomatoes and at the same time to have quick ready dish when you feel you are missing the sun and your fresh tomatoes from the garden.

This year we got a wonderful tomatoes harvest and we are still harvesting every day. We exchanged seed with friends and so we got an incredible variety of tomatoes and other vegetables. Now the winter is approaching, we all have to save electricity and with this method you will prepare great pasta dishes without spending a lot of time in cooking your tomatoes sauce.

Important! For sterilization with a pressure canner, please follow the instruction for the equipment. Depending on the Country you live, you will find completely different safety instruction about canning and possible botulinum poisoning.

Preserved Tomatoes with Basil in Jars 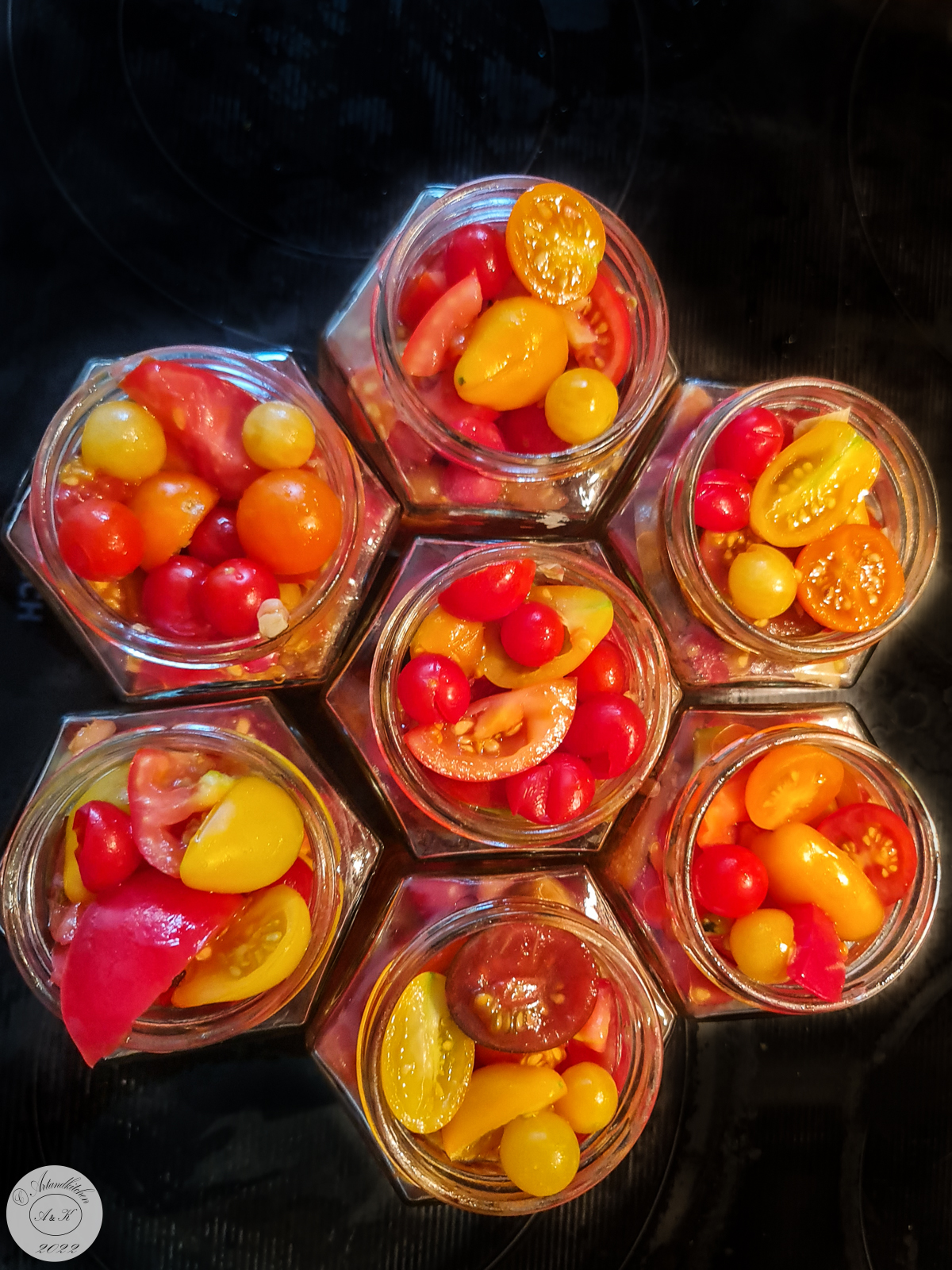 All quantity to taste and according to your harvest J

Suggestion: place the jar in water bath or shortly in microwave and serve over hot pasta with fresh grated Parmesan cheese and fresh basil Autor: https://artandkitchen.wordpress.com/

Early this year we saw indoors many kind of peppers and chilies, now in September many of them are ready and it’s a challenge to use them all.

We love to prepare them in the oven (see also……) as still green; we do not use only the “Pimientos de Padron” peppers for this recipe, we found that most peppers are great for this preparation.

I bought also some small round peppers called “ciliegia piccante” peppers, which are very often served stuffed and preserved in oil.

This time I used to prepare this recipe and as we had different kind of small (chili) peppers, we decided to use them in this way.  The “pimientos de Padron” I got are quite hot (may be as we had a hot and dry summer), and with this preparation we can reduce the heat and prepare something which can be enjoyed in winter as well.

We prepared two kinds of stuffing: one with tuna fish and the other with cream cheese.

All peppers where precooked in a vinegar solution and the jars were sterilized for longer storage.

Try these stuffed pepper recipe, this makes a truly impressive antipasti dish. These small peppers are bursting with flavour, thanks to the herbed fillings.

All quantities of the recipes are only a reference, you should adapt it to your taste

One of our absolute beloved, fresh and spongy super quick cake!

The source of this recipe is a popular recipe which we got in Spain and we adapted it reducing the oil and the sugar only for personal taste. We use Greek plain yogurt + fresh lemon instead of yogurt with lemon taste. In Spain this cake is also called “bizcocho 1 2 3 “.

We prepare if you are traveling into holidays apartments (yes, we I carried the empty tin with us) for a fast breakfast and a snack for our road trips.

For the easiest version you may use the container of your yogurt as the measure of 1 cup.

The combination of cassis and lemon gives to this cake a very strong and refreshing flavour.

We tried also these great variations:

This was one of the first Chines recipes we found in a cookbook (Kare Jup Ha Kow) and prepared as we started to travel around Asia and missing the Asian taste once back at home.

With the time we adapted the recipe to our taste but we kept the to the combination of prawns, broccoli and baby ginger; the last one the big hit in this dish!

This need a bit of time for the preparation of the broccoli florets and assembling with the prawn, but it looks so pretty that we never skipped this step.

This sumptuous delicious almond cake is topped with plums and perfumed with cinnamon. It has a soft base, a juicy fruity layer and at the same time it has a crunchy topping.

I imagine that this recipe could be used for many kind of fruits. Not only apricots, peaches, nectarines, but also apples, pears and why not, many kind of berries.

These pizza rolls are surprisingly easy to be prepared, but you need to start about 3 hours in advance as the dough need some time for rising. If you do not have time, skip the homemade pizza dough and try with a good quality store bough pizza dough.

The proposed filling is very simple, but you any other ingredients you like on pizzas.

Until now I’ve not yet posted a lot of recipes with pulses. Pulses are great source of proteins and they are effectively very versatile, which allow us to combine them with many ingredients.

This inspiration comes from a dish which I got the chance to try in Galicia (Spain) last December. It was in a picturesque village called just in front of the sea and a beautiful island. The ambiance with our friends, the golden sunlight and then this delicious dish made these moments unforgettable.

No wonder I tried to replicate this and adapt the recipe to ingredients I may found at home.

The original included a local lobster kind called “bogavante”, I’m sorry I had to replace it with langoustines, but it turned very delicious with them as well.

For my version it’s very important to prepare a shellfish stock.

As shellfish are generally quite expensive, it makes sense to be using up every last part of the crustacean in order not extract the maximum of the flavour. The shells and legs (once meat has been extracted where possible) of lobsters, crabs, crayfish, langoustines and prawns impart a lot of richness taste – especially after they’re roasted. Good to know: the heads also contain precious juices. While some more old-school recipes require the whole crustacean including its meat, this is a touch more work, but it is gently way to cook the tender flesh (short cooking time) and at the same time get as much taste as possible form the shells (long cooking time). Carefully shell crustaceans and keep the meat separate from the shells to be cooked and eaten separately. Rinse any shells which may be hiding grit or sand (this is particularly important with crabs) and break down larger shells into smaller pieces. This gives them a larger surface area, which touches the bottom of the pan and caramelises, creating more flavour.

In this blog I’ve already posted the recipe of our favorite tiramisu recipe with amaretto into a cake.

I replaced the raw eggs with more Greek yogurt which gives to the cake an additional fresh component and safer for the storage.

Make you family all tiramisu lovers happy with this simple recipe. 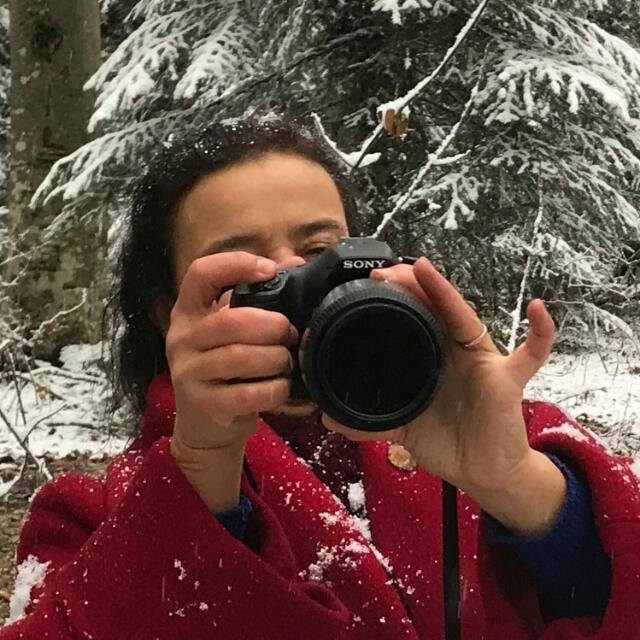